The satisfaction of an urban lifestyle,
with the serenity of waterfront vistas.
Welcome to Olympic Village, Vancouver!

In April of 2006, the City of Vancouver selected Millennium Properties to develop the Southeast False Creek Olympic Village to house over 2,800 athletes, coaches, and officials for the 2010 Winter Olympics and Paralympics. The 17 acres of land was previously used for shipbuilding, and heavy steel fabrication during and after the World Wars.

The project was completed in the summer of 2009, ahead of the 2010 Winter Olympics and Paralympics. Bordered by Cambie, Main, West 2nd Avenue, and False Creek. The City of Vancouver estimates that by 2020, the Olympic Village will be home to up to 16,000 residents.

If you are looking to relocate to Olympic Village,
feel free to contact us at your convenience.

If you would like your home in Olympic Village evaulated,
let us advise you with expert knowledge of the real estate market!

While the sea and mountains are geographical features that stand out on their own, there are many other elements of Vancouver that contribute to it consistently topping lists of the world’s most livable cities. For one, Vancouver continues to put a concerted effort into city planning. One such neighbourhood is Vancouver's Olympic Village.

Southeast False Creek was originally established in the late 1800's as a shipping and industrial hub. Situated on the waterfront, railway lines and trucking routes were built to move both raw and finished materials to their final destinations. As the city of Vancouver was built out, these lands — situated close to the central business district and on prime waterfront land — became too valuable for industrial use.

As a result, a world-class masterplanned neighbourhood was designed that aspired to the highest levels of livability, ecological health and economic prosperity. Vancouver's Olympic Village is a mixed-use community, with an emphasis on Olympic Village Condos, built out to the maximum possible density while meeting livability and sustainability objectives. Open spaces, parks, streets and pathways connect the entire site and link complementary neighborhoods. And to top it off, the seawall is now connected from Coal Harbour to Kitsilano - that’s over 22 km of connected, waterfront pathway that accommodates walking and picturesque bike rides.

The residential construction in and around Southeast False Creek continues, with a projected completion in 2020. Soon, the street will be home to bike lanes, pedestrian intersections, extra-wide sidewalks, landscaped front courtyards, public art and pathway connectivity. Southeast False Creek has gone from being a maligned “ghost town” after the Olympics to becoming a culturally rich, vibrant and sought-after neighbourhood, brimming with life, amenities, and world-class real estate opportunities. 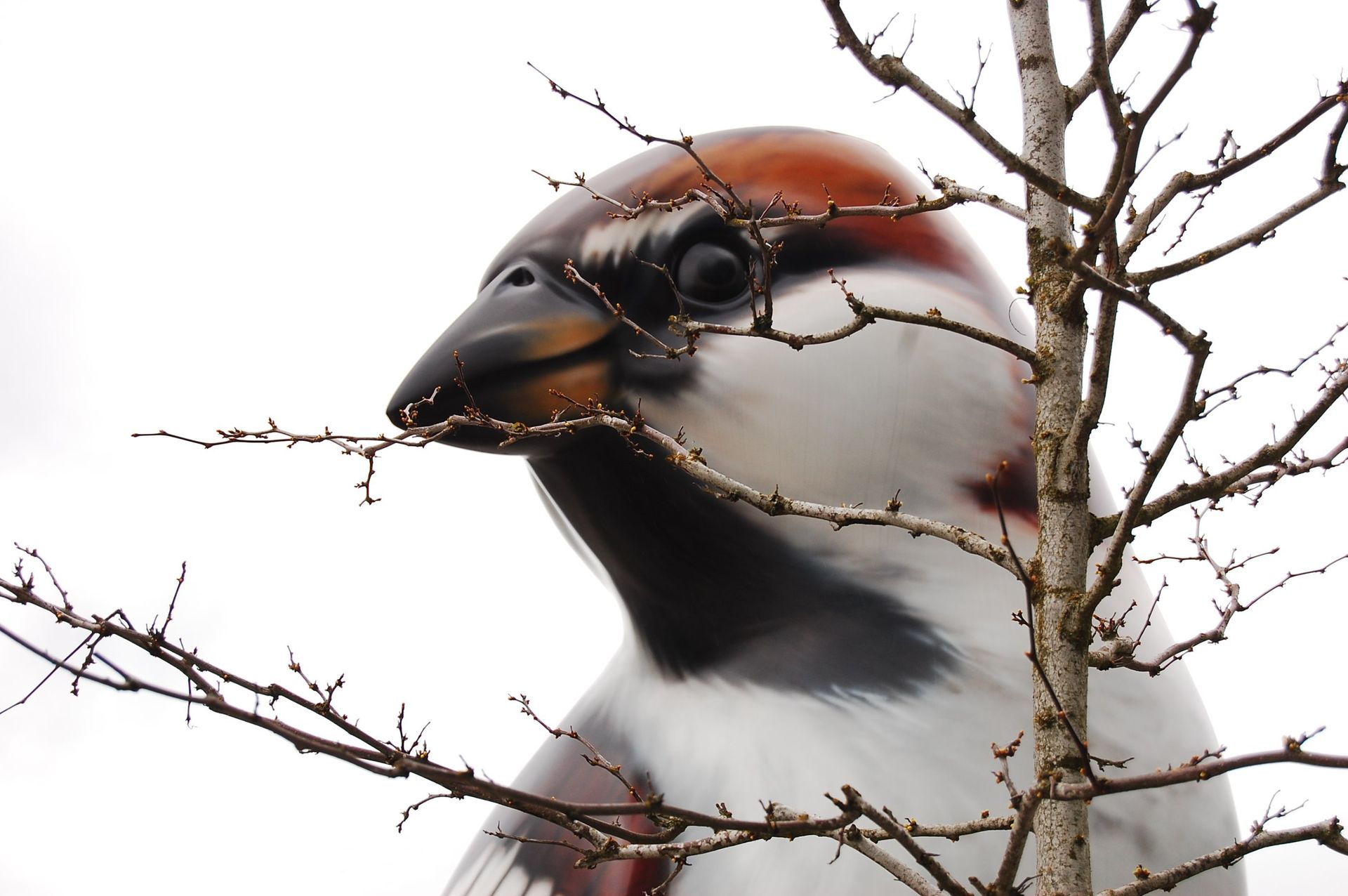 Art is at the core of Vancouver

"The Birds" are a pair of realistic statues in the shape of common sparrows, created by artist Myfanwy MacLeod. They're each 4.5 metres (15 feet) high and painted in authentic colours of the small birds that have spread all over North America after being introduced from the U.K. starting around 1850. They were introduced to control insects considered pests; and also for cultural nostalgia to recreate romantic ideas of the English countryside. Since then, sparrows have become a pest in their own right, crowding out similar native species. And they can be found, on a huge scale, at Vancouver's Olympic Village. 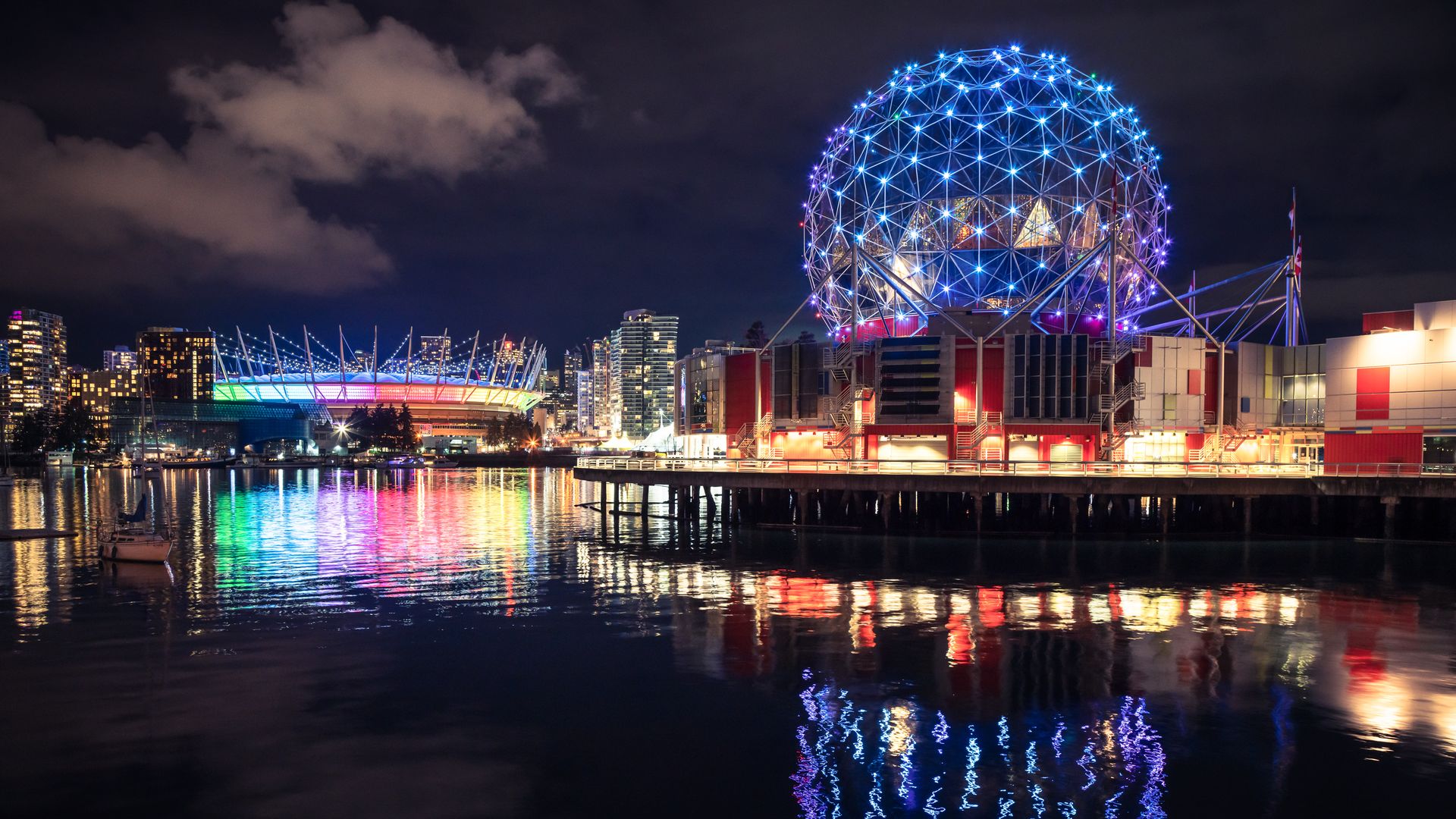 When Vancouver was awarded the 1986 World Fair (EXPO86), a Buckminster Fuller-inspired geodesic dome was designed by EXPO's cheif architect. Post-EXPO, the building has been converted into a science centre which houses many permanent and rotating displays and exhibits. You can't miss this futuristic dome along the False Creek skyline, and be sure to check out their events for kids and adults alike (Science World After Dark, anyone?).

Canoe Bridge is one of the most photographed landmarks in the Olympic Village; the bridge itself is 40-meters long and it spans across a section of the waterfront along False Creek. The bridge also serves to shelter the Tidal Amphitheatre, a stepped foreshore formed by granite blocks that leads directly to the sea. The Canoe Bridge was designed to mimic the ribs of a canoe or kayak, a tribute to the non-motorized boating experience that is an integral part of the people of the north. 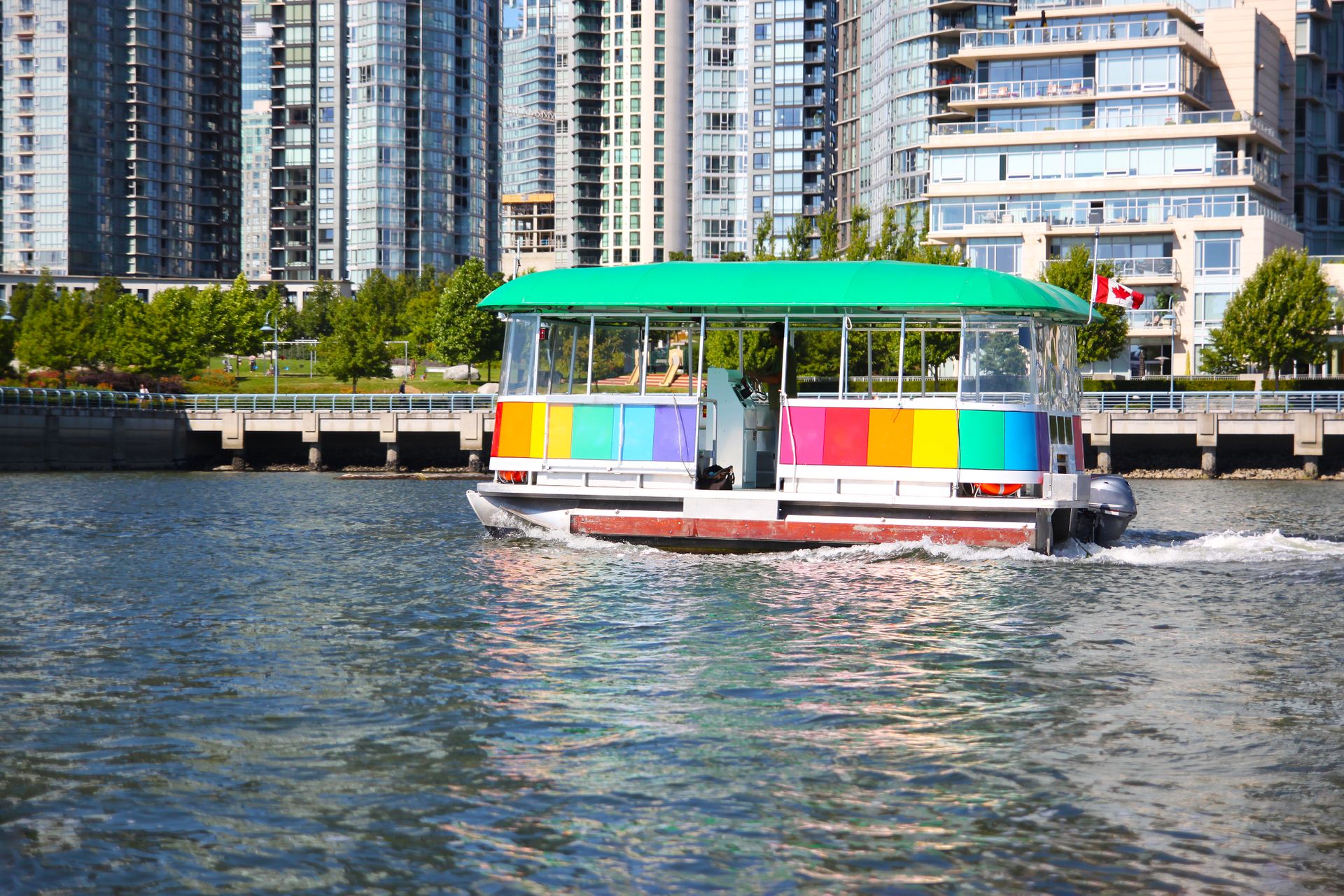 With 8 stops throughout False Creek, the Aquabus provides both commuter and sight-seeing services to all major destinations along Vancouver's spectuacular waterfront. Service began in time for EXPO86 with only four ferries in service, but the fleet has since grown to 11 ferries to serve the False Creek area. And all routes are wheelchair, bike, stroller and pet-friendly! So hop onboard at "The Village" stop (waterfront docks near the Tap & Barrel) for your daily commute or to take in the scenery. 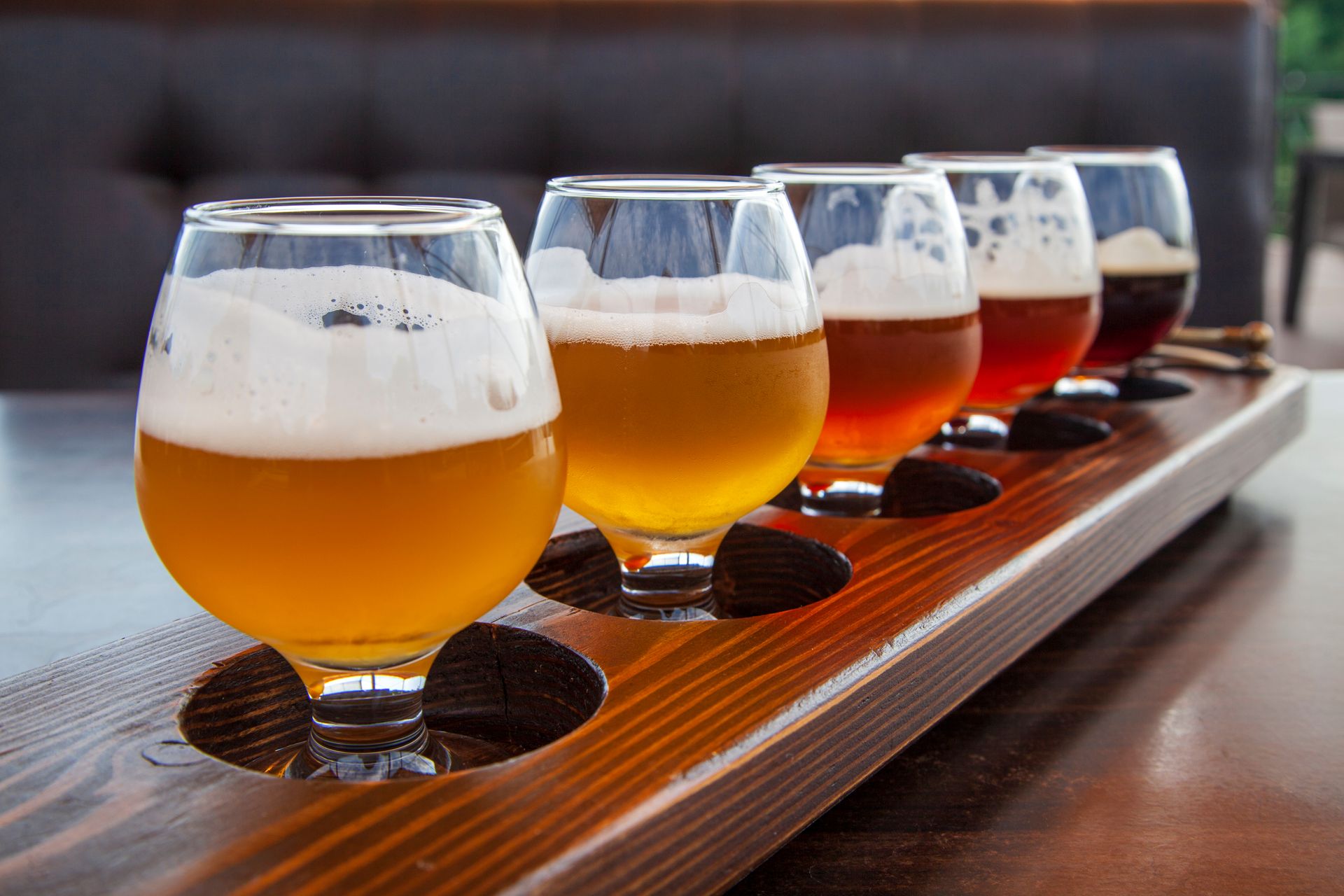 ...and, if you like beer, Olympic Village is the place for you! Home to a handful of mega-pubs (Craft, Tap & Barrel and Steel Toad), all boasting multiple different brews on tap - Local! Imported! Craft! Wines! There is truly something for everyone! Come thirsty, you won't leave disappointed.

And so many more to see!

You don't have to be a dragon boater or former Olympic athlete to love False Creek, there is just something cool about this former industrial area. It could be the proximity to artsy Granville Island Public Market or the many kilometers of waterfront pathways. One legacy of the 2014 Vancouver Olympics that remains is the Creekside Community Centre complete with fitness centre and boating facilities.

Stuff people say about me you might want to know about.

Peter Raab PREC* and Jess Tasker are independently owned and operated broker members of Engel & Volkers. This is not an offer for sale. Not intended to induce breach of an existing agency agreement.

2022 Olympic Village Listings, All Rights Reserved. Contents of this website, including the photography & videos, may not be used without written consent from Peter Raab and Jess Tasker. Maximum effort is put towards the details but cannot guarantee, buyer to verify all details.